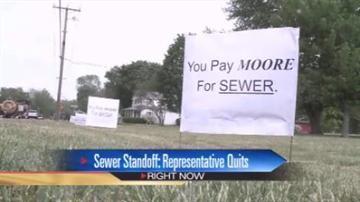 ELKHART, Ind -- One of the people selected to the serve on the Elkhart sewer task force has resigned. Representative Tim Neese believes the mayor violated state law when he shut out the public from the task force meeting.

The Elkhart sewer task force was created to find a reasonable compromise for the sewer compact agreement.

But the committee has been surrounded in controversy since Elkhart Mayor Dick Moore announced the meetings would all be private.

"It is not an open door and we're satisfied that it should not be. And we don't think the committee can do its work with an open door policy,” said Moore.

Moore argues that the 16 people on the board would not be able to freely express their opinions if they were observed by the general public.

After speaking directly with the state Public Access Counselor, one member of the task force is stepping down.

"He told me there is absolutely no situation in his mind, that would say, this should be a closed meeting,” said State Representative Tim Neese.

Neese confirmed with the state counselor that the closed meetings violate Indiana's Open Door Law and because of that violation, Neese chose to remove himself from the board.

"It just simply did not feel right to be a part of a committee that was disallowing the media or the public from attending,” said Neese.

Despite Neese's resignation and the state's opinion, Moore says the meetings will remain closed.

"We would lose more people if it's open door than if it's closed so, it has none. If we lose one or two because it's closed, the task force goes on, does its job. It's just an advisory group,” said Neese.

The state has given the city until June 11 to provide information about why these meetings should be closed.

The state then has until June 13 to create a formal opinion about the legality of the meetings.