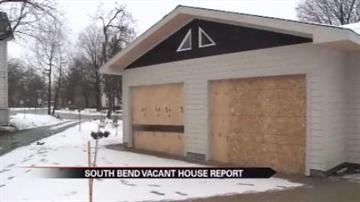 “Those houses that are a safety hazard, and a hazard to the people around them, need to come down,” said Buttigieg.

That is especially true if there is a plane to use that property for a side lot or a garden, like what was done at the corner of Riverside and California.

Samuel Valenzuela bought a vacant home and tore it down because it had become an eyesore in his neighborhood.

"It was a mess, full of garbage. We want people to walk on the sidewalks, and nobody was doing that because it was so ugly,” said Valenzuela.

When Valenzuela took on the task he was surprised by the amount of red tape and other delays he had to get through.

"It was 280 feet of asbestos wrapped pipes in there and they had to be abated,” said Valenzuela.

It was also more expensive than he initially expected, but says it was worth it.

"Eventually we will recover our investment because it becomes a much more attractive place to live,” said Valenzuela.

Valenzuela says that concept is catching on in his neighborhood.

"It makes everybody more secure in the idea that they can also invest in their properties and improve them,” said Valenzuela.

Ultimately, Valenzuela is doing exactly what Mayor Buttigieg wants people all over South Bend to do.

"More turnaround stories like this are going to be a very important part of how we address that thousand houses that we want to move off the rolls of the vacant and abandoned,” said Buttigieg.

Mayor Buttigieg made another big announcement. Catherine Toppel, the Director of Code Enforcement for the city, has been replaced.