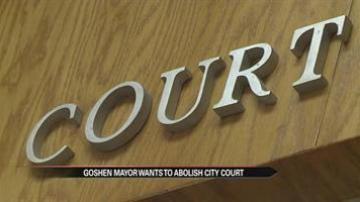 "People don't say, 'I'm going to move to Goshen, because they have a City Court,'" said Goshen Mayor Allan Kauffman.

For Kauffman, keeping the city court open isn't worth it any more.

"It doesn't make financial sense when we have these pressures that are brought on by tax caps," said Kauffman.

The year, the city has already lost $4 million in revenue partly because of tax caps.

Mayor Kauffman says funding emergency services and the park system should be the priority.

"We've done the things that businesses do to get more efficient. We're at the point of either raising the price of the product or cheapening the product, and nobody wants to cheapen the product," said Kauffman.

For people who use the local court system, it's the difference between paying a ticket in minutes, or hours.

"That is a big convenience for us to be local right here instead of worrying about how we're getting to court, missing court dates, stuff like that," said Goshen resident Pamela Heintzelman.

We asked representatives at the court for their side, but no one was able to comment.

But several employees did express concern about their jobs.

Mayor Kauffman acknowledges the decision is a difficult one to make, but one he says makes the most sense during a time of economic uncertainty.

The city council will take up the issue at a meeting Tuesday night.