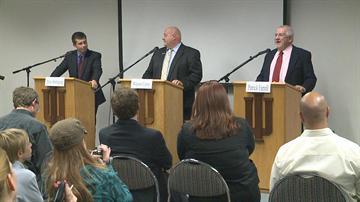 SOUTH BEND, Ind. – Candidates for mayor of South Bend squared-off in a debate at Indiana University’s South Bend campus on Thursday night.  With the recent string of shootings and home invasions around South Bend, many of the questions posed by the community focused on the growing crime problem in the city.

Each candidate agreed that something must be done to reduce crime, especially on the west side and each candidate has dealt with the problem personally.  Republican candidate Wayne Curry explained that his neighborhood had once been overrun with crime and gang activity.

"Realistically, you shouldn't have to move into a neighborhood and change your lifestyle," Curry explained.

Curry described his plan, he doesn’t want to increase funding or hire more officers for the police department.  Rather, Curry wants to explore options to make better use of the department’s current resources.  He intends to model his new plan on recent policy used in Chicago, which puts detectives on the street rather than in the office and restructuring the police department.

"Take some of the detectives and put them on the streets and creating units to deal with neighborhood crime specifically, divide the city into three or four quadrants and have an area chief and give them the things they need to reduce the crime and expect results,” Curry explained.

Democrat Pete Buttigieg also had a close run-in with crime; one of the recent home invasions occurred within a block of his home.

“We can’t expect that level of crime, there’s never been a zero crime rate but we can’t ever be satisfied until it’s better,” Buttigieg explained.

Buttigieg explained that he would like to hire more police officers and expand the department’s budget, but explained funding such an increase wouldn’t be realistic.  Buttigieg’s plan would call for more community involvement from officers.

"One of the things we could do is encourage officers to spend more time personally getting to know people in the beats that they cover,” Buttigieg explained.  “Good officers are doing this already and it has a big impact because they get information about a crime before it happens instead of responding to a call."

As crime has increased on the west side recently, Libertarian candidate Pat Farrell has been attending community meetings about crime.

“The people that live there are very afraid and it’s really bad when you have fear in a country like this, no one should live in fear this is the United States of America,” Farrell explained.

Farrell said he wants to divert money from other projects and put it towards the police department.  However, like Curry, he wants to restructure the department’s current resources and get more officers out of the office and onto the street.

“If they're not out on the street and they're sitting there and we're paying them I think we could be better structuring their time while they're at work," Farrell explained.

Each candidate stressed that the community needs to be involved in solving the problem.  The mayoral election takes place on Nov. 8.