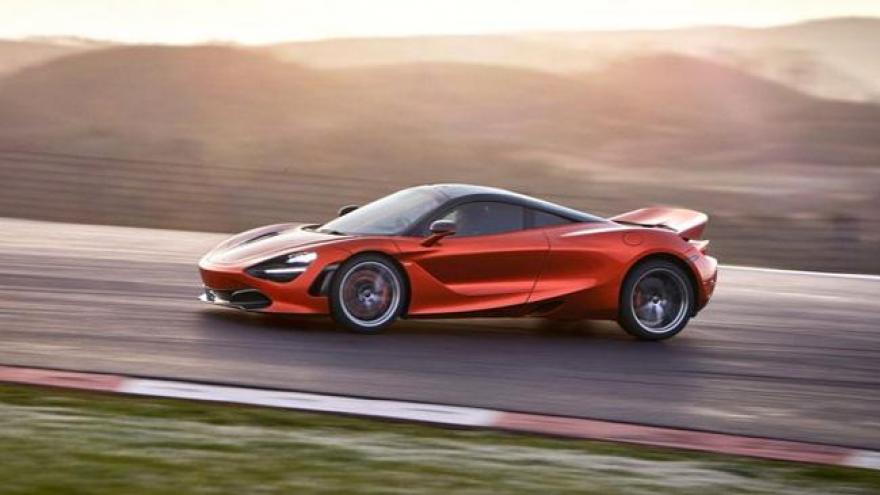 The McLaren 720S is first in a new generation of street-legal supercars from a manufacturer that had long been known for making track-only race cars.

It replaces McLaren's current mid-range model, the 650S. In exotic car fashion, the 710 horsepower two-seater has its V8 engine mounted behind the seats and a body designed almost entirely around air flow. The new car is expected to cost about $280,000 to start.

The turbocharged V8 engine requires enormous amounts of air keep cool, but you can't see air vents on the side of the car. That's because air channels are hidden in the car's complex two-layer doors.

The doors open upward with part of the roof swinging up with them. That makes it easy to slide down into the seats. Once inside, the driver and passenger sit under something that closely resembles a fighter jet canopy. The windshield pillars are designed to be largely see-through providing nearly complete visibility out onto the road over the car's low hood.

The "gauge cluster" is really a computer screen mounted on a rotating pad. As the driver opens the door and gets in, the screen flips up to a vertical position providing a full set of gauges including graphical speedometer and tachometer dials. For track use, the screen goes down flat again, exposing only a narrow ribbon-like display with critical information, like the car's speed and a multi-colored band representing engine RPMs. This provides the driver the best possible view of the road with a minimum of distraction.

McLaren promises a wider breadth of driving feel -- from comfortable street driving to aggressive track driving -- than has been available before.

The body is made largely from lightweight carbon fiber, the same sort of material used to make McLaren's race cars.

The new 720S has so-called "active aerodynamics" that keep the car pinned to the ground even at very high speeds. The car's large rear wing, which lies flat most of the time, rises to help push the car down and will rise more to help stop the car when the driver brakes hard.

With a seven speed automatic transmission, which can be controlled by steering wheel paddles, the 720S can go from zero to 60 miles per hour in 2.8 seconds, according to McLaren. Top speed is 212 miles per hour.

The launch of the #McLaren 720S at the 2017 Geneva Motor Show. What do you think of the car so far? pic.twitter.com/dQ2OU0cv6o