Mechanical issues may be responsible for business fire 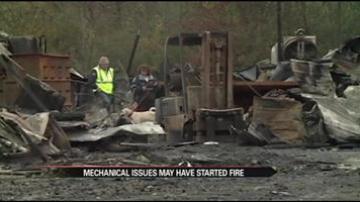 SOUTH BEND, Ind. -- A South Bend business owner is picking up the pieces after a massive fire destroyed an entire building at his plant. Fire crews say they believe they know what caused the fire.

Fire crews say mechanical issues may have caused the fire.

What he saw was a massive fire right across the street from where he lives.

Officials say the flames broke out around 9:15 Monday night, after at least one explosion.

"When I arrived and I was the first one here-the whole building was on fire, there was nothing that wasn't burning," said Chief Terry Korpal of the Southwest Central Fire Territory.

It took about 15 trucks and 50 firefighters 2 hours to put the flames out.

The building was destroyed.

Fire crews returned to the scene Tuesday trying to piece together what might have started the explosion. They even used canines to detect any sign of arson.

Fire crews say arson has been ruled out.

"We're looking at a heat exchanger in the front of the building. They said they had some mechanical issues with that," said Korpal.

A heat exchanger is something Abtrex uses to make their plastic molds and fiber glass.

"If I really wanted to talk about devastations I would say my dad, who I grew up doing this business with, for all of my life since I was 12, he died last July and I would say that was harder than this will ever be," said Byars.

Byars is already planning for the future and looking forward to rebuilding.

No one was injured in this fire.

HAZMAT crews found no chemicals in the air.