Medic rescues own grandmother from crash 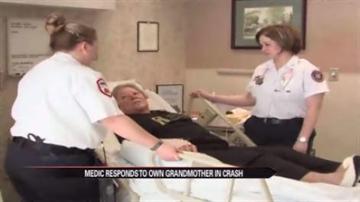 OKLAHOMA CITY -- An Oklahoma paramedic can say she helped save her grandmother's life Monday after she found her grandmother pinned inside a crushed car.

Firefighters were forced to cut the woman from the car allowing the paramedic and her partner to get her grandmother to the hospital.

"I could see injuries on her, but I grew especially concerned when she didn't recognize Carey," said Holly Westine, EMSA medic.

"My main focus now is that I have to get everybody in the back of that ambulance to the hospital safely," said Carey Crump, grandmother in crash.

It turns out her granddaughter was not the only one to respond to that scene. The victim's son, who is a local deputy, also responded.

The woman is recovering in the hospital.