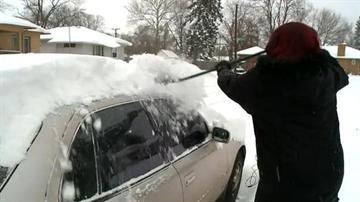 "I want to make sure that my car isn't the one holding up the snowplow on this road. That's why I'm digging my car out now."

Nestled away from major roadways, it can be days before roads like Medora Street will see a plow once the snow starts falling.

But when they do show up, Beverly Perry doesn't want to get blocked in.

"Well, if the Street Department would come down here and clean off the streets, it probably wouldn't be as bad. We're one of the last streets, I think,  to have done."

It's a problem people living on Medora deal with every winter.

"Depending where they put the snow, it's hard."

"it blocks a lot of people in, leaves a lot of snow laying in the middle of the street. You've gotta get out with a shovel and clean it."

So far, this winter had been quiet, but a major snow storm is dumping several inches on South Bend. Crews are doing their best to keep the roads open.

Despite the amount, the snow is powdery and easy to move.

"I'm not going to complain. It could be worse."

"I really don't think it's that bad."

"It's not really bad right now, you can still get up and down the street."

But Tanner said it may not stay that way.

"It's when it goes for a couple three days and you don't see a plow, and you can't even get out of your front driveway. That gets really bad."

"Give ti tonight and tomorrow, and if they don't do it, it will start getting really nasty."

But that's not likely to happen this time. Right after talking to ABC 57, three plows rolled down the street, clearing several inches of snow, and making neighbors quite happy.