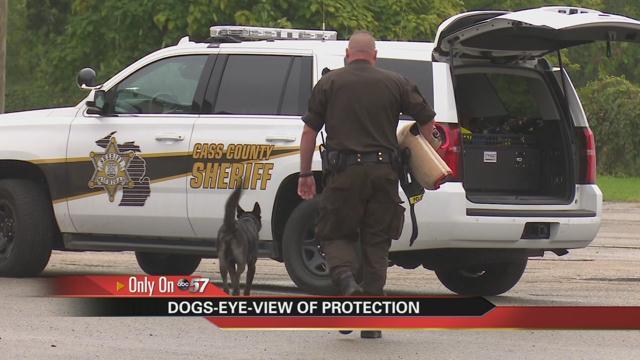 “It’s a bond there that you can describe, but few people ever understand it,” Dowagiac Police K-9 Officer Kevin Roman said.

“We spend more time with them than we do with our own family,” Cass County Sheriff K-9 Deputy Dave Nevins said.

“They are members of the department just like any of the other officers that are here,” Dowagiac Police Chief Steve Grinnewald said.

From a dogs-eye view, their work can often look like play.

But the dogs working for the Dowagiac Police Department and the Cass County Sheriff’s Department definitely work.

“The biggest moment that we’ve had was saving an elderly Alzheimer’s patient,” Roman said.

“At any time, if we get into an altercation with somebody, we can hit the door popper and Faust will be right there, ready to help me out if I need him,” Nevins said.

Faust is a three-year-old Dutch shepherd who started working for the Cass County Sheriff’s Department in June.

His handler is Nevins, a 12-year veteran on the force.

“Both of my children love Faust to death,” Nevins said. “I have a five-year-old daughter and a one-year-old son. And when we’re at home, [Faust is] off duty and he plays with them just like any other house dog would.”

Tole is a three-year-old German shepherd who started working for the Dowagiac Police Department in June.

His handler is Roman, a three-year veteran on the force.

“It’s the best job in the world,” Roman said.

And it’s an important job.

“We’ve found stuff that I wouldn’t have found, probably, before,” Roman said.

When not fighting crime, Grinnewald said the dogs play a big role in community policing.

“It’s a great tool to kind of introduce people to the officers and realize that they’re just hard-working guys that are just trying to do a good job,’ Grinnewald said.

And though both Roman and Nevins are new to the K-9 unit, they said the idea of now working without their trusted sidekicks seems impossible.

“I did it for three years without the dog,” Roman said. “But now? No. No, I would never give up Tole.”

Tole and Faust have tracked down domestic violence suspects hiding in the woods, sniffed out drugs in multiple scenarios and located a missing person – all in their first three months on the job.

Grinnewald said the average career span for a police dog is 10 to 11 years.

Once they retire, they usually get to stay with their handlers, so the bond that’s been formed is never broken.