Melania Trump unveils her platform, tells kids to 'Be Best' 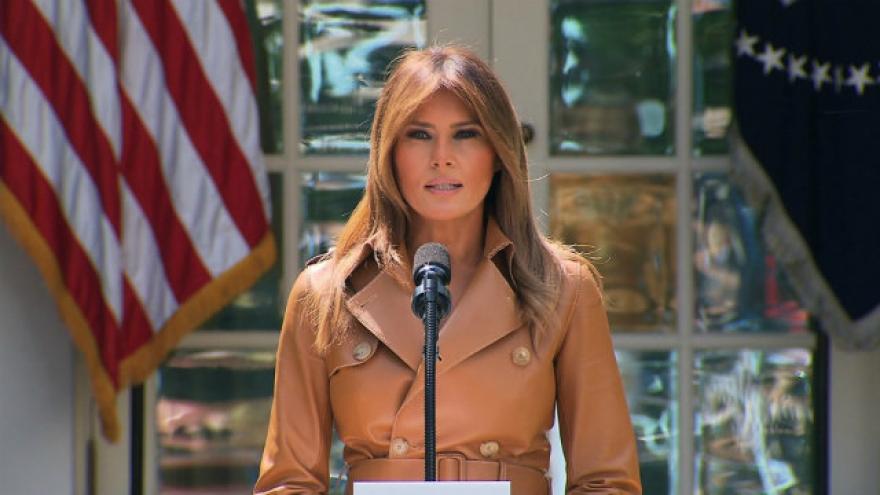 Melania Trump, nearly 16 months into her tenure as first lady, has at last revealed her formal platform: \"Be Best.\" The comprehensive program will focus on three main points -- well-being, fighting opioid abuse and positivity on social media. Photo courtesy POOL

(CNN) -- Melania Trump, nearly 16 months into her tenure as first lady, has at last revealed her formal platform: "Be Best." The comprehensive program will focus on three main points -- well-being, fighting opioid abuse and positivity on social media -- and is the culmination of the past several months of Trump's various public events, all of which centered around helping children.

"As a mother and as first lady, it concerns me that in today's fast-paced and ever-connected world, children can be less prepared to express or manage their emotions and oftentimes turn to forms of destructive or addictive behavior such as bullying, drug addiction or even suicide," she said during a Rose Garden event Monday.

"I feel strongly that as adults we can and should be best at educating our children about the importance of a healthy and balanced life," the first lady said.

Trump has in recent weeks experienced a significant surge in support, a new CNN poll revealed Monday, including among women and Democrats.

In a poll conducted by SSRS last week, 57% say they have a favorable impression of Trump, up from 47% in January. This is the biggest number Melania Trump has experienced in any CNN polling, and higher than any favorability rating earned by President Donald Trump in CNN polling history going back to 1999.

Twenty-seven percent of respondents have an unfavorable view of the first lady.

The platform pillars she revealed during her 10-minute speech in the White House Rose Garden include well-being, encompassing healthy living as well as emotional health; opioid abuse, including bringing awareness to neonatal abstinence syndrome and emphasizing the importance of healthy pregnancy; and social media, where Trump plans to encourage kids to use the internet in positive ways, tamping down cyberbullying and negativity.

The last of these issues has been a lightning rod of controversy for Trump, whose husband is perhaps one of the most public, and prolific, offenders of name-calling on Twitter.

Sitting in the front row, feet from his wife at the podium, the President listened as the first lady cautioned against using the very behavior Trump displays, sometimes on a daily basis.

"As we all know, social media can both positively and negatively affect our children. But too often, it is used in negative ways," said Trump. "When children learn positive online behaviors early on, social media can be used in productive ways and can affect positive change."

Asked about the President's online behavior earlier Monday, White House press secretary Sarah Sanders rejected the suggestion that he has fostered a climate where cyberbullying exists.

"I think the idea that you're trying to blame cyberbullying on the President -- when it comes to kids this is something that has been problematic and something that we have seen over the last decade," Sanders said.

At the end of the event, Trump did not take questions, and her spokeswoman indicated the first lady will not be doing any interviews. Trump's only one-on-one televised interview as first lady was with CNN last year in China.

Also seated in the audience Monday were leaders from the various tech companies Trump assembled at the White House in March to discuss ways to improve social media kindness. Executives from Google, Twitter, Facebook, Amazon, Microsoft and Snap listened to the speech alongside representatives from the Families for Online Safety Institute.

"It is our responsibility as adults to educate and remind (children) that when they are using their voices -- whether verbally or online -- they must choose their words wisely and speak with respect and compassion," said Trump.

The first lady mentioned 8th grader Kalani Goldberg from Arizona, who posted a video on her social media account expressing what she was going through facing bullies.

Trump thanked Goldberg, in attendance at the White House with her family, for the bravery she demonstrated by coming forward.

"I am happy to report that since posting her video, many have watched it and most importantly, people have reached out to offer support and kindness," the first lady said Monday as she recognized Goldberg.

Trump also paid personal attention to Christian Bucks, who as a second grader in Pennsylvania developed something called the "Buddy Bench" to help connect kids during recess; by sitting on the bench, a child was signaling other students to ask him or her to play. The first lady used the example to tout her commitment to helping emotional health in children, developing relationship skills.

The first lady devoted a portion of her speech to the opioid epidemic, saying she first became aware of the extensiveness of the crisis while campaigning with her husband two years ago. Since becoming first lady, Trump has met with medical experts and families affected by the rampant explosion of prescription drug use across the country, visiting states such as West Virginia and Ohio, which are on the front lines of the addiction crisis. As part of "Be Best," Trump said she wanted to promote programs that educate families about Neonatal Abstinence Syndrome and the impact of drug use on children.

Trump, a former model and designer, has not had the past policy experience of her most recent predecessors.

Former first lady Michelle Obama was a corporate attorney, a public service advocate and a senator's spouse before Barack Obama was elected president. She announced her "Let's Move" campaign to help end childhood obesity in February of 2010.

Though a librarian, Laura Bush had long been exposed to political life before her husband entered the White House. As part of the Bush family dynasty, Bush was versed in education policy and literacy programs for kids, her platform, which she unveiled in June of her first year as first lady.

Hillary Clinton championed health care, going so far as to attempt to overhaul the United States health care system during the beginning of Bill Clinton's tenure. Hillary Clinton famously opted to have her office in the West Wing, closer to the political mechanisms of the White House, than the East Wing, where first ladies traditionally work with their staff.

Trump's team is also smaller than in years' past, and, says the first lady's communications director Stephanie Grisham, they are a "tightly knit" group. In the weeks leading up to Monday's unveiling of "Be Best" Trump's staff has also had to tackle the intricacies of the administration's very first State Dinner.