Mending a broken heart; La Porte teen is one of the first in the state to get special heart valve 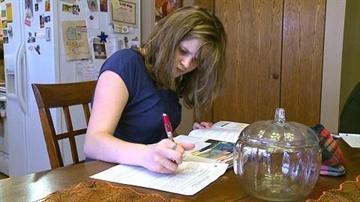 LA PORTE, Ind. – Shawna DeGraff is like most 15-year-old girls and you wouldn’t know it if you saw her, but the teen was born with a rare heart condition.

She has had two open heart surgeries already, and was scheduled for a third. Doctors have to go in and fix her heart separating and rebuilding parts that did not grow properly while she was in the womb.

The condition is called truncus arteriosus. It is rare form of congenital heart disease that is usually found at birth.

Neonatal surgery is the usual treatment for the problem, which will currently persist for the patient’s entire life. Every so often, people with this condition will have to undergo surgery to maintain the solutions doctors applied to get their heart working properly.

These solutions can be valves, tubes and tunnels, and most if not all of them wear out over time. Until recently, repairing these would require open heart surgery.

Shawna remembers being scared of the surgeries as a child, and she certainly wasn’t looking forward to one that was scheduled recently. Each time, the recovery would take weeks and she would have to try and make up school work in order to maintain her perfect 4.0 GPA she carries.

Shawna is not alone in dealing with this condition. Her older sister also has it. According to their parents, Shelly and Cliff DeGraff, one-in-100 children have this kind of congenital heart disease and; the odds a sibling will also have it are increased.

While Shawna has had two surgeries, her older sister Courtney has had three. Complications with her neonatal surgery, has left Courtney in worse shape than her sister.

Blind in one eye, and unable to see clearly out of the other, the 18-year-old is visually impaired. She describes it as if having tunnel vision in one eye, or looking down a long tube. She struggles with a lack of depth perception and occasionally has difficulty recognizing faces.

Despite this challenge, and having a small defibrillator implanted in her chest, Courtney keeps high spirits, saying, the two sisters support each other through a mutual understanding of what the other is going through.

Courtney says, she was thrilled when an alternative that would keep Shawna from having her third open heart surgery was found.

The call from the girl’s physician, Dr. Mark Hoyer a cardiologist at Riley Hospital for Children at Indiana University Health in Indianapolis, came a few weeks before Shawna was to go under the knife.

Shawna’s mother says Dr. Hoyer was excited about the news when he called. “He says, I’m pretty sure… pretty sure, she won’t have to have heart surgery. And I’m like, okay let’s do it. Put us on that list,” said Shelly DeGraff.

The procedure uses a catheter to deliver the small Melody Transcatheter Pulmonary Valve to the heart. When the catheter reaches the heart by travelling up through an artery in her leg, a balloon inflates opening the valve and setting into place.

The valve directs the blood where it is supposed to go, into the lungs, and prevents it from spilling back into the heart. The whole procedure can take about two hours and patients can be discharged from the hospital a short time after that. Open heart surgery takes hours to complete, and recovery can last for weeks.

Shawna was one of the first three people in the state to receive the implant. Her sister may be among the next group. Both girls are headed to Riley Hospital for Children in a few weeks for a check-up.

For Shawna, the new implant should last up to 10 years before it needs to be replaced. And as medical treatments and technology continue to advance, perhaps she and her sister won’t have to suffer through another long recovery after open heart surgery ever again.