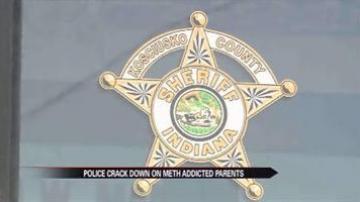 KOSCIUSKO COUNTY, Ind. -- The Kosciusko County Sheriff's Office is cracking down on meth use because it often leads to child neglect. Half of the cases investigated by the Department of Child Services involve meth.

Methamphetamine is an addictive drug that hurts not only the users, but their children as well.

"I would say on average more than 50 percent of our cases involve meth,” said Erin Shidler, local director of the Department of Child Services.

Shidler says her cases with children torn from meth homes outnumber those of physical and sexual abuse.

She says child neglect almost always is coupled with a parent's use of meth.

"Meth use can cause parents to neglect their children's' basic needs. Just general supervision, being fed, having clean clothes. Their medical health needs can also be neglected,” said Shidler.

Police say in about 10 percent of the county's meth investigations children are found inside the home subjected to the toxic fumes.

"Sometimes the children are in a back-room, a bedroom, but that's still usually a very dangerous level and it's usually unknown how long it's actually been going on that these children have been inhaling these types of dangerous, toxic fumes,” said Sergeant Chad Hill, Public Information Officer for Kosciusko County Sheriff's Department.

Children often test positive for meth because they ingest the residue inside the home. This leads to more health issues.

Although Kosiusko County's reported meth numbers are high, Hill says that's because the community members know what to look for.

"It's just that we've had several different seminars to make our public aware of what to look for so we then end up getting a lot of telephone calls to the tip line that we go ahead and follow up and investigate. And in fact there is a meth lab in production at that residence,” said Hill.

Police say bringing attention to a suspicious household is the first step to saving kids from that situation.