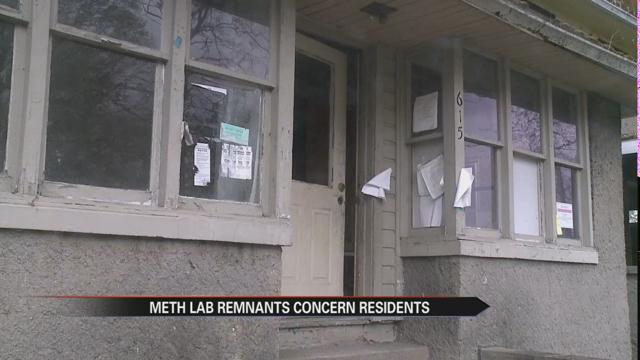 Elkhart Police say they found remnants of a meth lab outside a vacant home on High Street in Elkhart. Neighbors say the abandoned homes are attracting problems.

“As a child I came home when the street lights came on. Now I can't let my kids out of my sight,” says Chris Watson of Elkhart.

Watson has three kids and has lived in Elkhart for three years. He says he does not feel safe in his own neighborhood.

So when Watson found out about the incident that happened at 615 High Street, he was not surprised.

On Monday crews working on the abandoned home found 6 one-liter bottles full of a suspicious material outside of the home.

Elkhart Police say the bottles were used to make meth.

“We have a home that is behind us that is used for drug purposes. There is a lot of in and outs – dealing with the city time and time again to get them to come out and reboard up the house,” says Watson.

Watson says there is not just one problem house and Elkhart Police agree these abandoned homes do tend to attract problems.

“Get rid of all these junk houses, the ones that are derelict and falling apart. They need to go,” says Watson.

According to City of Elkhart Building Commissioner Dennis Corell there are up to 80 abandoned homes in the city, but just one team to board up them all.

Corell  says the process to razing a home is a long one. Corell says step one for people living near blighted homes is taking pictures with time stamps and reporting it to the Building and Code Enforcement Department.