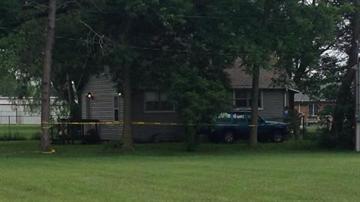 OSCEOLA, Ind. -- The St. Joseph County Metro Homicide Unit is investigating a murder-suicide that happened at a home on West Rogers Street in Osceola.

At 8:51 a.m. Tuesday, the Osceola Police Department responded to the home.

Inside, they found two deceased individuals with gunshot wounds.

"It was an older guy and an older girl, both kind of short but they've lived here for about a year, year and a half and we've only talked to him once," said neighbor Matt Graham.

Graham lives directly across the street from the home where the murder suicide happened.

Police tape lines the property and the Metro Homicide Unit was on scene for several hours.

Neighbors say they are disturbed the residents are now dead.

"I haven't ever really heard anything from them. They're really quiet people, usually in their house or gone," said Graham.

Police say they died from apparent gunshot wounds, but they wouldn't say who did the killing.

One neighbor says the husband was just out cutting the grass Monday night.