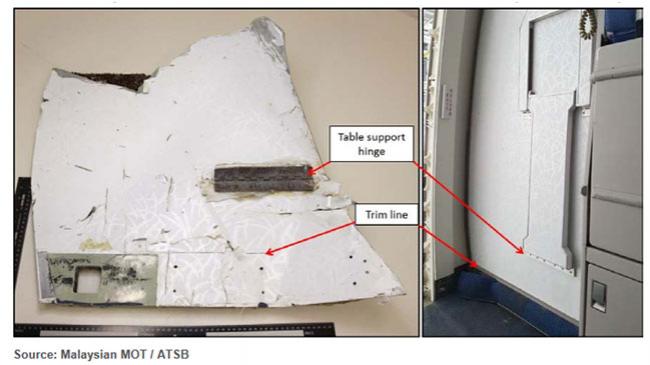 (CNN) -- Two pieces of debris found on beaches in South Africa and Mauritius on March 22 and 30, respectively, are "almost certainly" from missing Malaysian Airlines Flight 370, a report from the Australian Transport Safety Bureau has found.

The flight disappeared in March 2014, seemingly without a trace. A search in the southern Indian Ocean, thousands of kilometers off the west coast of Australia, is ongoing. Since then one piece of debris has conclusively been linked to the plane.

The update to the ongoing report, published May 12, states that the two items -- determined to be a segment from an aircraft engine cowling and an interior panel from the main cabin -- were from a Malaysian Airlines Boeing 777, and "almost certainly" from the aircraft registered 9M-MRO, the registration number of the missing plane.

The piece designated "Part No. 3," the engine cowling, features a partial stencil from manufacturer Rolls Royce. "The panel thickness, materials and construction conformed to the applicable drawings for Boeing 777 engine cowlings," the report states. While the stencil was not unique to the missing plane, it was consistent with the logo used by Malaysian Airlines.

It was inconclusive as to which engine the cowling came from, the report added.

"Part No. 4," the other piece of debris -- an interior panel -- was identified by a hinge on a closet panel. "The part materials, dimensions, construction and fasteners were all consistent with the drawing for the panel assembly and matched that installed on other" Malaysian Airlines Boeing 777 craft, the report states.

Marine samples found adhered to the pieces were also being studied, and the results are pending. "The results from these tests will be provided to the Malaysian investigation team once complete," according to the report.

The only piece that has conclusively been determined to be from MH370 is a piece -- the flaperon -- found on Reunion Island last year.

"This conclusion is another case where common sense says the pieces came from MH370 but it can't be conclusively proved," CNN's Richard Quest said.

"The families are unlikely to accept this as evidence that the plane did founder in the southern Indian ocean."

In April, two pieces of debris recovered from beaches in Mozambique -- one found in December and the other in February -- also were declared to "almost certainly" have come from missing Malaysia Airlines plane, the ATSB said.