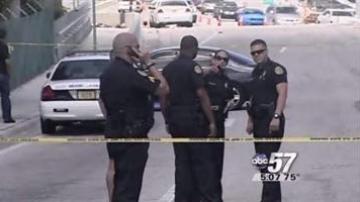 MIAMI, Fla. -- Disturbing new details and surveillance video have been released about an incident that involved a naked man and cannibalism.

It happened on a Florida highway. When officers arrived to the scene Saturday, they saw a naked man eating another man's face. Witnesses describe it as a scene out of a horror movie.

A Miami Herald surveillance camera caught the aftermath the two men lying side by side on the ground.