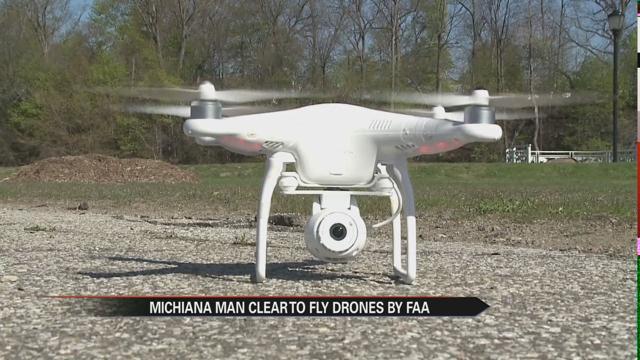 There are more than 200 companies across the country who are using drones to expand their business. Anthony Sydor is the first business owner vetted by the FAA to fly drones in Michiana.

“There is a vast industry that is booming with these,” said Sydor.

Sydor says these small, lightweight devices are proving to be a powerful tool in the success of his photography business.

“Drones are basically flying computers is what they are,” said Sydor.

The flying computers are capable of shooting video, still images and even broadcasting live.

The drones can go as high as 1000 feet and up to 22 miles per hour. They can travel as far as one mile on batteries.

Sydor is thrilled that after seven months he's been given the all clear to fly.

“Got the letter in the mail from the FAA. It was very exciting,” said Sydor.

Right now he is the only Indiana business owner who can say that.

“I'm the only company in the state of Indiana that can do this as a commercial business. I'm one of about 300 people in the entire country that can do this,” said Sydor.

“Main ones is it took them in line of sight, only fly during daylight hours, to keep under 400 foot,” said Sydor.

In addition, he must stay five miles from towered airports and 3 miles from airports without towers.

Sydor looks forward to the day drones will be used to help deliver medicine or food to those in need and perform dangerous jobs such as inspecting cell phone towers.