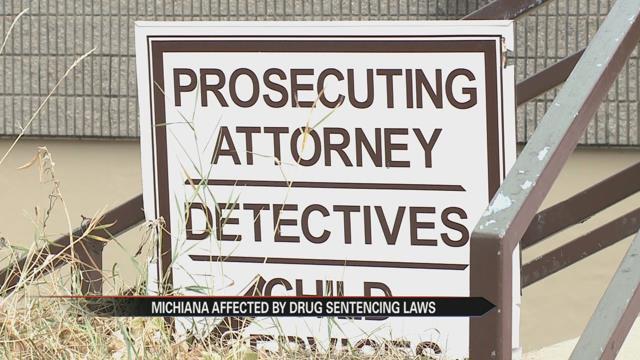 Michiana county prosecutors are slowly adjusting to the changes made to the country’s drug sentencing laws last year by the Obama administration.

“The last thing that I want to do is to put a drug user in prison,” St. Joseph County Prosecutor Ken Cotter said. “That’s a waste of our resources and, more importantly, it’s a waste for them, themselves.”

For drug users, Cotter said, “Coupling the potential sentence with rehabilitation is paramount.”

But for drug dealers, Cotter said, “They need to understand you can’t deal in our community.”

“If you fail to address that problem than you’re failing not only that offender, but also, the community at large,” Bourff said.

All three Michiana county prosecutors agreed that people who make and deal drugs should serve longer sentences than those who only use - supporting the recent national changes.

“I really do believe that the most important thing we can do for a user is to rehabilitate them to get them to stop being an addict,” Cotter said.

But other changes, including the shortening of certain drug offenders’ sentences and different jailing processes for lower-level offenders, received tougher reviews.

“I think the legislature may have... have overreacted,” Espar said.

Bourff said the changes now require low-level drug offenders in Starke County to serve their sentences in the county jail rather than utilize the Department of Corrections that has access to certain rehab programs.

“We really can’t do that anymore,” Bourff said. “We don’t have the rehabilitation program here in our jail to offer that and we can’t sentence them long enough to where they can complete a program anyway.”

Each county prosecutor said drug crimes should be dealt with case by case because every person’s situation is different.

Bourff said he is hopeful Starke County officials will figure out a way to offer rehabilitation programs in the county jail.