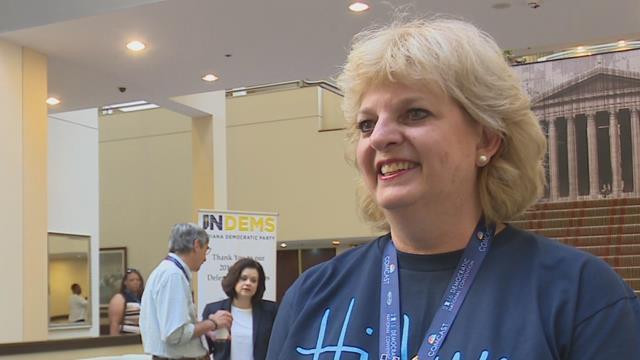 History was made at the Democratic National Convention Tuesday night when Hillary Clinton was nominated as the party’s presidential candidate. Her nomination brought local delegates to tears.

For Clinton’s Michiana delegates, they say this isn't just a victory for a party but a victory for everyone. They say it is a moment they'll never forget.

“It was extremely emotional. We're so proud of Hillary,” said Debbie Ladyga-Block, a Clinton delegate from Mishawaka.

“We're happy that a woman got in,” said Carol McDaniel, a Clinton delegate and Vice Chair of La Porte County Democrats.

“Eight years ago, I was able to tell my two sons, you can do anything you want to do in life. And now I can look and tell my daughters the same thing. So it's a great, great experience. I can't believe this is happening in my lifetime,” said Joe Taylor, a Clinton delegate and UAW Leader.

Clinton’s delegates are still feeling the excitement one day after Clinton was nominated as the Democratic candidate for president.

“To think we're going to be passing this on to our children and their children,” said McDaniel.

A feeling McDaniel never thought she'd get to experience.

But local delegates say it's not just about Clinton being a woman.

“Not only is she a woman, she's a qualified woman,” said Catherine Fanello, Clinton delegate and Chair of the St. Joseph County Election Board.

A qualified woman they hope will be the next president.

“When I was growing up, women were not involved in politics. To think we're going to be passing this on to our children and their children it really, it helps to think that women can now help run the country,” said Mc Daniel.

Clinton is set to formally accept the nomination Thursday night.