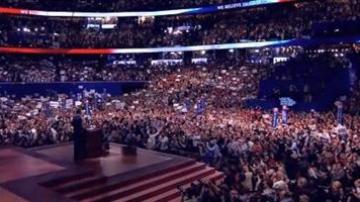 This week, it's President Obama and the Democrats' turn.

Thousands are turning out for the DNC in Charlotte to talk about issues related to their party's platform.

Michiana has several first-time delegates attending the convention, and they're excited to be a part of the hype.

"It's pretty cool to see and be in the environment of this young crowd," Emily Voorde, a South Bend delegate and sophomore at the University of Notre Dame, said. "There's so much diversity."

She and fellow La Porte resident, Aaron Collings, are just two of 644 youth delegates at this year's convention -- a record number!

"I'm very happy to be here," Collings said. "I'm honored by the 2nd Congressional district for choosing to elect me to represent the district. Just overjoyed."

Geof Benson from Beverly Shores joins them in North Carolina. He's excited to hear about issues related to the economy.

"I'm worried. There's a lot at stake," Benson said. "And that's why I'm here. I think it's important enough to be a delegate and take the responsibility to vote and to convince other people to vote for the right reasons."

Benson is one of 13 delegates from the Michiana area.