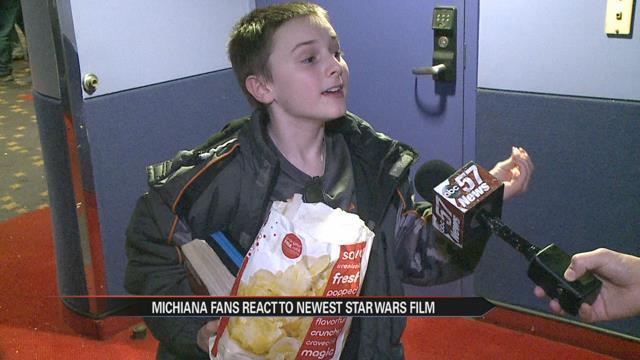 One of the most anticipated movies in years was released in theaters on Thursday night.

Star Wars fans packed Showplace 16 in South Bend and were not disappointed.

“It could be the best one so far,” said Kelly Burgess, another Star Wars fan.

For fans of the saga, Star Wars was more than just a movie, it was a homecoming.

“I’ve grown up with them and it’s always been there,” said Jay Wise, a Star Wars fan.

The 7th episode of the stars wars saga brought together all generations.

“The first one that I watched, of course I was 15. It was unbelievable and earth shaking and blew my mind but this was awesome as well,” said Art Jacobs, a Star Wars moviegoer.

Some who saw the premiere, came in costume while others were eager to pass down a lifelong tradition.

“I saw it twice tonight, back to back. I’m seeing it Monday with my brother, in IMAX next week, and seeing it when I get back a couple of times for the spring semester,” said Julio Salazar, a lifelong Star Wars fan.

Demand for the Force Awakens was so high at Showplace 16 that they added a 12:15 showing.