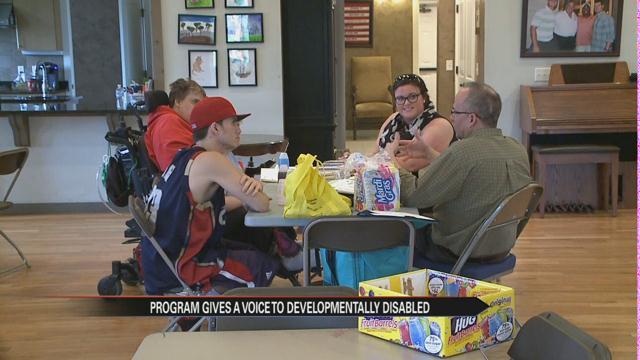 Mosaic, a Michiana group, is working to give adults with developmental disabilities more of a voice.

The organizers say that a lot of times it's other people advocating on the behalf of disabled people, but just because someone has autism, cerebral palsy, or down syndrome, doesn't mean his or her voice can't be heard.

“They are human beings like everybody else that should have the ability of risk to go out and do things, and make mistakes,” Elizabeth Goldman, quality assurance coordinator of Mosaic Indiana, said.

The program is the new St. Joseph chapter of Self-Advocates of Indiana.

They're holding small guided meetings to begin until they gain enough leadership for the members to run the programs themselves.

Laura McDowell, of South Bend, is running for treasurer.

She says she feels her intelligence is sometimes overlooked because of her Spina bifida.

“I'm very bright. Smart. I could tell them anything they wanted to know,” McDowell said.

She and her friends are speaking up about ideas already.

They want more staff at their assisted living residence and job opportunities.

“I want to get a job so bad,” McDowell's friend, Rachel Gates said.

Goldman hopes the program raises awareness and allows anyone with disabilities to feel fully involved in his or her community.

"We're focusing on community integration, getting out of these isolated, segregated settings,” Goldman said.