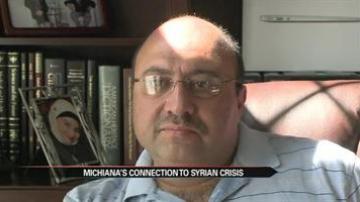 SOUTH BEND, Ind. -- A Michiana man from Syria went to school with Syrian President Bashar al-Assad who allegedly used sarin gas on his own people. Thousands were killed and a Michiana man, who is a native of Syria, wants to help people in his home country.

"There is no Syrian family that did not lose a member," said Ray Kadi of Syrian Orphan Sponsorship.

Born in Syria, Kadi came to Michiana almost 30 years ago. But he's always been interested in what's happening in his home country.

He has been watching Assad, a former classmate, commit crimes he says are inhumane.

"We're allowing him to get bigger and stronger," said Kadi.

Assad is under international investigation for his alleged use of chemical weapons last month.

"I don't want to live in a place where we allow somebody to kill that bad," said Kadi.

The attack last month is just a small part of the overall picture, Kadi says.

He has set up a charity to help children orphaned by the civil war.

"We're talking about 6 million people dislocated. I mean, those people are living in the street, in parks," said Kadi.

He hopes America will intervene soon, but isn't counting on it.

That puts him and others in a difficult situation. He has to figure out how to send aid when Assad is dropping bombs.

Right now President Obama is working with Russia in hopes of getting Syria to hand over those chemical weapons.

Whether that will work out is still unknown.