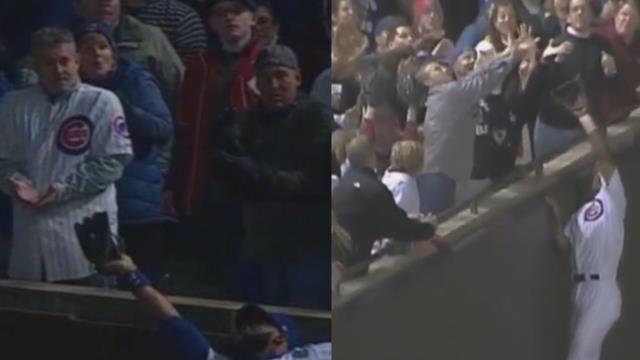 Cubs fans are calling it the 'Anti-Bartman' play.

A play that could ultimately help reverse the curse.

Unlike the Bartman play in 2003, this fan, pulled his hands away, allowing the Cubs player to catch the ball.

That fan, Tom McGovern of Granger.

“I just didn’t want to be Bartman,” said McGovern.

The play is eerily similar to 2003, when Steve Bartman disrupted a potential out in the National League Championship Series.

And we all know what happened from there.

Bartman would be removed from the game and exiled in to Cubs infamy forever.

That brings us to the 2016 Fall Classic.

In Game 5 during the 3rd inning, McGovern and three friends were sitting along the right field line, remembering something his wife has repeatedly told him.

“She likes to remind me, don’t pull a Bartman,” said McGovern.

A foul ball was headed towards the right field seats, a ball in which Cubs Outfielder Jason Heyward was tracking.

“I felt the wall, I moved back a little bit. When it started getting a little closer, I just wanted to make sure I didn’t put my hands over the wall,” said McGovern.

McGovern could not be happier about his decision to pull his hands back and not attempt to catch the foul ball.

Heyward’s catch would ignite the Cubs to a Game 5 win and send the series back to Cleveland for Game 6, and ultimately a deciding Game 7.

These two plays could not have been more opposite.

And if the 2016 Cubs go on to reverse the curse and win the World Series, McGovern would have lent a helping hand.

“Now I know what it would have felt like if I reached over. So it’s a memory I’ll always have,” said McGovern.