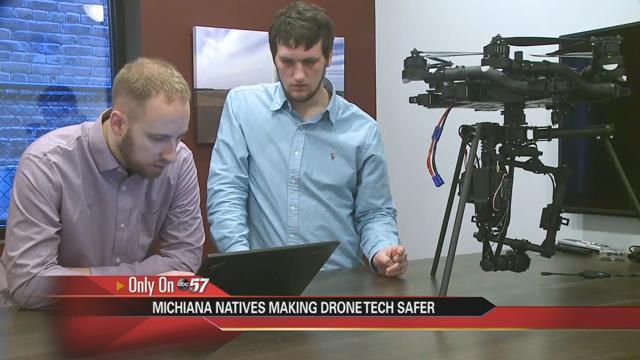 SkySpecs was founded in 2012 by Tom Brady from Three Rivers, MI and Danny Ellis from Portage, MI.  These two made the Forbes 30 under 30 list this year for their drone safety technology.

“I was sitting in a meeting and my phone was vibrating like crazy,” said Ellis.  “Tom was out here and he comes into the meeting and say hey you got to come here for a minute and I was like ok. I walked over to his computer and he was like ‘hey look a this list’ and I’m looking and I’m like ‘cool, nice list.’  He scrolls a little bit down further and there’s our names and so we were quite surprised, very honored to be a part of the group.  Didn’t really expect it to be coming at all.”

“I had gotten a text from one of the guys who used to work with us and he says ‘hey look at you guys on this list’ so we were just stunned and like Danny said totally honored be on it,” said Brady.

Brady and Ellis met back in 2007 as interns. They created a student led group called Michigan Autonomous Aerial Vehicles (MAAV). It was a group for students to get together and build drones.

SkySpecs doesn’t build drones, they create technology to make them safer for people to use.

“When we started SkySpecs, it was focused on inspection,” said Ellis. “So we kind of looked at all of the inspection markets and decided that bridges were the ones that needed it the most.”

Wind turbines are currently their target market. They use their technology to inspect blades so technicians don’t have to dangle from ropes.

“We’re primarily focused on business use cases for drones,” said Brady. “So you think of any sort of location or application where it’s either really challenging or dangerous for a human to go collect some sort of data whether it’s a picture or a laser scan, or thermal image, whatever it might be.”

The software they developed is called Guardian which is collision detection and avoidance technology.

“The collision avoidance in essence is a set of sensors that see the world around the drone, and using that sensor information we determine what objects are approaching us, how far away they are and how fast they’re coming at us,” Brady said.  “Just like you would if there was a baseball flying at you for example.  You would gauge at what angle it is approaching you, is it going to hit me, and how fast is it coming at me?  And once I figure out how fast it’s coming at me that determines how fast I need to duck or if I can wait to see if it’s going to brake at the end.”

They made the technology very simple to use.

“Our end goal is to make it what we call push button autonomous, so that you just push a single button and the drone does the inspection,” said Ellis.  “If I gave anybody the controls they’d be able to fly around and not hit anything.  It’s actually pretty scary at first because you don’t realize the drone is taking over and you actually want control but then when you realize you can fly really close and it’s not going to hit it’s kind of a cool experience.”