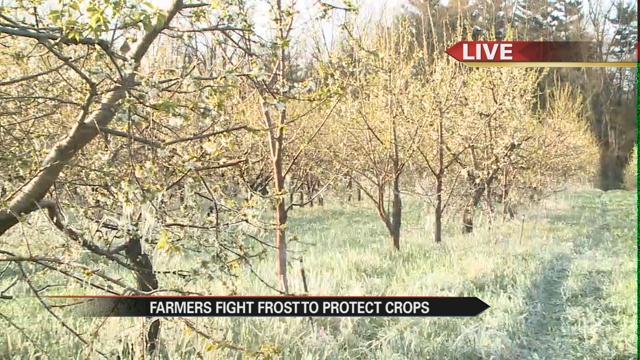 Michiana orchard farmers have to work a little harder after the frost that was seen early Friday morning.

Temperatures dropped below freezing overnight, which is typical for this time of year.

However, that makes orchard growers like Lehman's Orchard in Niles, Mich. have to overhaul according to Farm Manager Steve Lecklider.

“Most of our crops are delayed in their development, but the sweet cherries are the furthest along, and they're most vulnerable to any of the below freezing temperatures,” Lecklider said.

The farm is 60 acres and there are about 350 cherry trees, including sweet and tart cherry trees.

Cherry trees are some of the first trees to bloom and somewhat sets the stage for the rest of the growing season.

“At this point where the flowers are open on the sweet cherries, they're vulnerable at about 29 degrees Fahrenheit. That's where you start to see some damage to the crop. The later into the spring, as we move forward we will see less and less damage,” added Lecklider.

To help protect the trees, the Farm Manager turned on ground sprinklers at 3 a.m. to help warm up the ground area.

"It warms up the surface of the land and the heat rises through the canopy. I don't see where we're going to have too much damage.

The sprinklers are operated through an underground water system. Friday morning the farm ran two wells, which spanned across three acres and had an output of 70 gallons per minute.

They plan to turn the sprinklers off at about 10 a.m. after the frost melts.