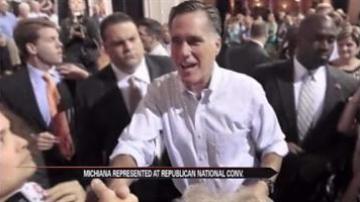 South Bend, IN -- The Republican National Convention is officially under way after Tropical Storm Isaac delayed its start by a day.

GOP'ers wasted no time in formally choosing Mitt Romney as the party's nominee.

"I am truly honored to announce these votes for a man who happens to be my brother, and whom I love," Romney said. "Mitt Romney is the next President of the United States."

Romney recieved the 1,144 votes necessary to face President Obama in November in just a few hours.

"I think it's a great combination and a good ticket for the Republican Party," Marlin Stutzman, Congressman for Indiana's 6th District, said. "And it's a good ticket for America, because we have to fix these issues sooner, rather than later."

Overall, Indiana has 46 delegates in Tampa, and Michigan has 30. Indiana State GOP Chairman, Eric Holcomb, is thrilled that Romney is officially the party's candidate.

"President Obama won our state just four years ago, and we're not going to make that mistake twice," Holcomb said. "So folks are really fired up back home, and on the ground."

Jackie Walorski, a candidate for Indiana's 2nd Congressional District, was one of today's convention speakers. She touted Indiana's comeback from a massive deficit shortfall.

She said with a Romney/Ryan ticket, fiscal responsibility will be a top priority.

"In the face of record unemployment, we understood that more government spending will not create jobs," Walorski said.