Michiana veterans come together to continue their lifelong bond 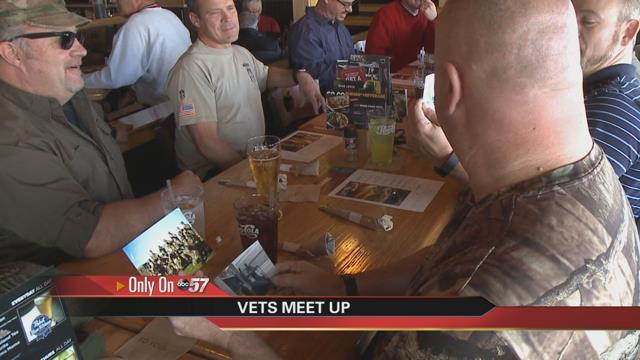 On Friday, the country celebrates veterans and their service and only ABC57 News was invited to a special lunch that’s generally reserved for old war-buddies.

Some of the men are Vietnam vets and outside the Elkhart County Courthouse, there’s this plaque specifically dedicated to soldiers who served there.

At this lunch those Vietnam vets were also joined by service members who fought in Iraq. 10 of them have been having lunch together since 2004

“At least one day a year so we can keep that bond going and not so much through social media, but together once a year to where we can hug, laugh and smile,” said Ellis.

These ten started off at the armory in Elkhart and some even got deployed together.

For 12 years they have met up for breakfast or lunch to keep the bond between them going and this year they met at Applebee’s in Elkhart.

Some served in Vietnam and Iraq and others here at home, being called in to help at the 1996 Atlanta Olympics, like Sergeant Lowe. He says this lunch is much more than just a meal.

“It’s a way to kind of get some things out and just reconnect and realize we’re here for each other,” said Sergeant Lowe.

Pictures were floating around the table while these vets reminisced about their time serving.

“Having these guys, who’ve been through a similar situation to rely on and talk to really helped me through the struggles I had when I first came home,” said Corporal Rob Briney.

This shared lunch did not only have an impact on the veterans. The employees of Applebee’s also felt the importance of the holiday.

“It’s kind of chilling; it kind of gives you chills just to hear the stories that the vets have to tell you,” said Joshua Mohr the General Manager of Applebee’s.

According to the vets, the bond they have between each other has been the most rewarding. Corporal Briney said this holiday has become more important to him.