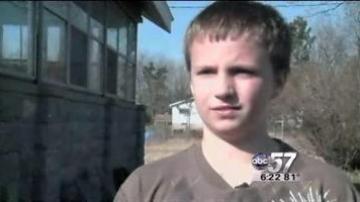 SARANAC, Mich. -- From playing outside to being buried alive!

A Michigan boy is alive and well after being sucked into the ground on Wednesday!

It happened in just seconds.

11-year-old Nicholas Nelson was digging on this sand hill, when it swallowed him whole!

His family and first responders worked for 30 minutes to dig him out!

"When they pulled him out -- he wasn't breathing, they gave him a few breaths by mouth, used the bag, and he fought back on his own," said Aimee Nelson, Nicholas' mother.

"It was just like a scary moment. I thought I was going to be gone," said Nicholas Nelson.

Get this -- this isn't the first cclose call for Nicholas. Just a few years ago, he fell through the ice and his brother saved him.