Michigan City man getting Romney tattoo removed from his face 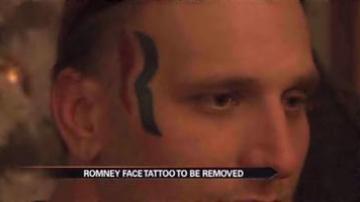 MICHIGAN CITY, Ind. -- Eric Hartsburg, A Michigan City man was paid $15,000 to tattoo the Romney campaign logo on his face.

He went on several media outlets and promised he would keep the tattoo forever, but now, he's had a change of heart.

At one time, Hartsburg was arguably one of the biggest Romney supporters. But since the election, that has changed drastically.

"I can't look myself in the face and be like, 'Yeah that's the logo of a guy that just makes excuses.'" Hartsburg said.

Hartsburg decided to get the tattoo removed Wednesday and he is already getting backlash from the community.

He's been receiving hate mail accusing him of only getting the tattoo for attention.

"They couldn't be more correct! Of course, who gets a tattoo on their face and isn't looking for attention!?" Hartsburg said his goal was to, "Garner the most attention and the most controversy and I don't think I could've done anything better."

In a few weeks, Hartsburg will be flown out to Los Angeles to begin his tattoo removal treatment free of charge.

He said this will probably be his last political tattoo.