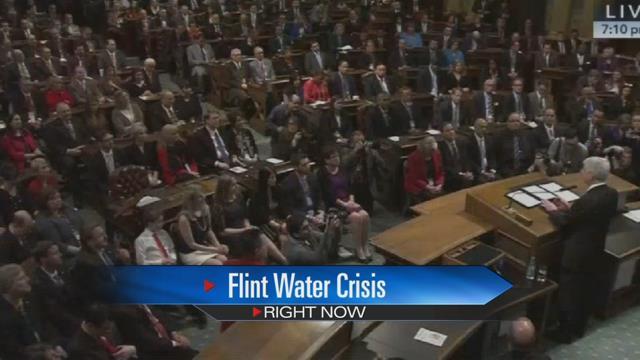 The governor took responsibility for the ongoing water crisis in Flint.

Monday, he promised transparency as he works to find a solution.

“I give you my commitment that Michigan will not let you down,” said Gov. Snyder in his address.

The governor delivered a statewide apology Tuesday night at the beginning of his annual address.

“Government failed you, federal, state and local leaders, by breaking the trust you placed in us,” he said.

So far the state has spent more than $9 million in relief back in 2015.

Monday, the governor said he requested $28 million more from the general fund.

“The most important thing we can do right now is to work hard and to work together for the people of Flint,” he said.

Beyond monetary support, the governor addressed the growing dissension with his administration.

“You deserve accountability, you deserve to know that the buck stops here with me,” he said.

So he promised further checks and balances and complete transparency moving forward.

“[Wednesday] I will release my 2014 and 2015 emails regarding Flint to you, the citizens, so you will have answers to your questions about what we’ve done and we’re doing to make this right for the families of Flint,” he said.

He pointed to the amount of debt Detroit public schools is in as a need to focus on statewide public school funding.