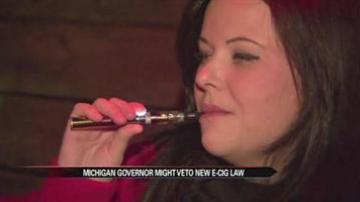 LANSING, Mich. -- Governor Rick Snyder signaled he may veto legislation to prevent minors from buying electronic cigarettes because he does not think it would go far enough and regulate the vaporizers like traditional tobacco products.

The Governor says he has "had issues" with the bills and they will get extra review.

The legislature approved three e-cigarette measures that would prohibit the sale and use of e-cigarettes devices by those under age 18.

Tobacco companies and legislators say it is better to immediately stop sales to minors while letting the federal government study and sort out regulatory issues.

The State Department of Community Health and health advocates say e-cigarettes should be treated like traditional tobacco, so they could be banned in workplaces or restaurants or be subject to other tobacco-control laws.
Share this article: