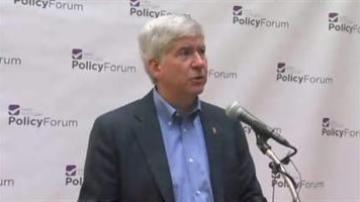 GRAND RAPIDS, Mich. -- Promoting trade with Canada is just one of the several top priorities for Michigan governor Rick Snyder.

The governor addressed talks of building a new bridge to Canada to help boost trade during a policy forum Thursday.

Voters at the forum discussed several potential priorities for lawmakers ahead of the upcoming election.

The governor says he is also concerned about a proposal about a ballot on collective bargaining.

"I'm concerned about the labor proposal that I call the 'back in time' proposal," Snyder said. "The 'back in time' amendment, which brings up many issues, I'm afraid that people could help provoke discussions on many labor related issues which I think are divisive."

Snyder also went on to say that he thinks all of the ballot proposals facing Michigan voters in the November are bad policy.