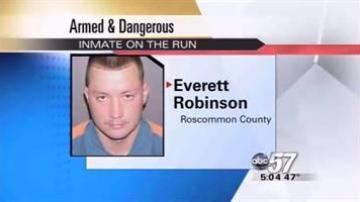 ROSCOMMON COUNTY, Mich. -- An inmate described as "armed and dangerous" is on the run.

Monday, Roscommon County officers say 29-year-old Everett Robinson escaped from custody and he took off with a deputy's gun.

Police say he was being driven to court on home invasion charges when he got away.

“The inmate actually came through the petition or window separating the two and was able to struggle with deputy and obtain his pistol,” said Roscommon County Sheriff Randall Stevenson

Police say Robinson then stole the patrol car, but he later ditched it near the freeway and a witness saw him run into the woods.