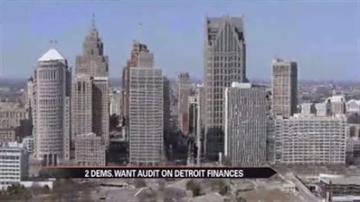 DETROIT — Two Michigan lawmakers have questions about the state's takeover of Detroit's finances.

They are asking for an audit.

Two congressional democrats wrote a letter to the federal government.

In the letter, they suggest financial emergency managers in other Michigan cities' mismanaged funds.

The new emergency financial manager for Detroit starts on Monday.