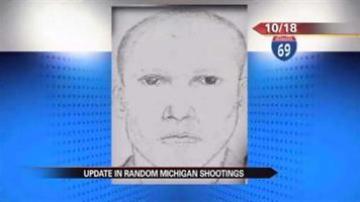 OAKLAND COUNTY, Mich. -- People in a Michigan community remain on edge after a series of random shootings directed at vehicles.

Several police departments have teamed up to track the shooting suspect down. And investigators have reportedly linked bullets from several of the shootings to the same gun.

On Wednesday, police released a sketch of a man who is shooting tires, rims and grills of cars.

But some drivers remain concerned about using certain routes.

"It's a little unsettling knowing that someone has been shooting at people randomly," said Trevor Klempner. "Those are the things you're most scared of, it's the random acts of violence."

Within two days, there were 16 shootings in Oakland County.