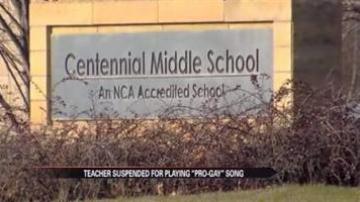 SOUTH LYON, Mich. -- A performing arts teacher in Michigan was suspended after playing a song about being gay to students in her class.

The teacher said an eighth grader suggested the song, "Same Love" by a Seattle based hip-hop artist.

The song talks about bullying and growing up gay.

After learning the song did not have swear words in it, the teacher played the song as a away to teach kids about diversity.

But not everyone thought it was appropriate.

A student who was offended complained to the principal.

The teacher was suspended for three days.

"She's a wonderful teacher," Bridge Kozlowski, an employee at the school, said. "I think she should have job, she should be able to come back and continue what she does and that's teach."

The American Civil Liberties Union will be filing a Freedom of Information Act request to see her rights were violated.