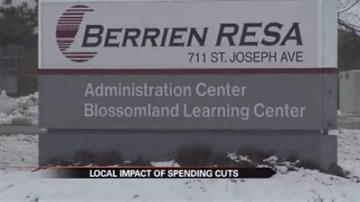 BERRIEN COUNTY, Ind. -- In Michigan, the state could lose $22 million in federal funds for education. The districts that suffer the most will be those with a high poverty rate and those with lots of special needs students.

Dr. Kevin Ivers of the Berrien County Regional Education Service Agency says poverty stricken districts, like Benton Harbor, will feel the biggest blow because of the large amount of federal dollars they receive for each low income student.

He says intermediate school districts, like RESA, will suffer too because they get a lot of federal money for career tech programs and special needs students.

"In total there would be about $357,000 in federal cuts but really what hurts about this is we’re just coming off of the year when we've had cuts from the state level,” said Ivers.

He says $325,000 would have to be trimmed from the special education school budget.

"So that has a direct impact in the services that we provide here,” said Ivers.

There are only two free--standing schools used to educate special needs students across the entire county.

Dr. Ivers said he and his staff have talked about how these spending cuts would hurt local school districts with Congressman Fred Upton.

He just hopes other members of congress are getting pressured by school districts in their states to stop the cuts from happening.