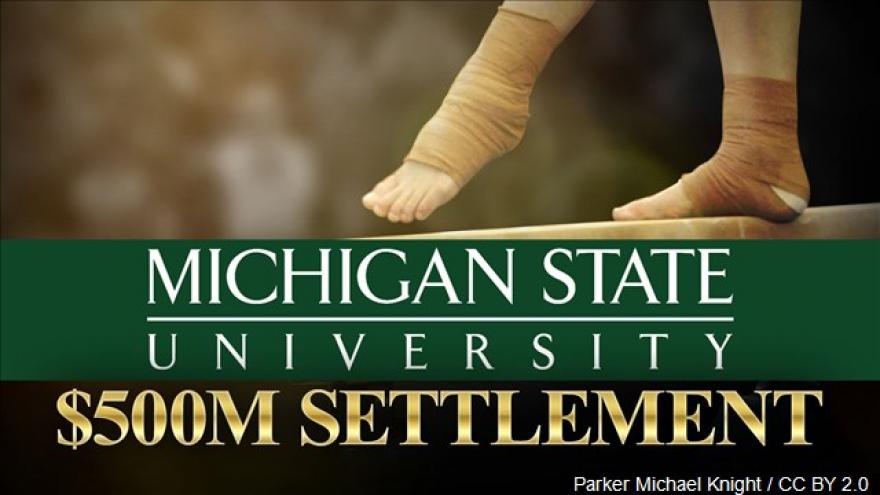 Michigan State University\'s embattled interim president survived an attempted ouster from the school\'s governing board Friday as trustees met to approve using a bond to finance a $500 million settlement with hundreds of women and girls who said they were sexually assaulted by sports doctor Larry Nassar. Photo courtesy Parker Michael Knight / CC BY 2.0

EAST LANSING, Mich. (AP) — Michigan State University's embattled interim president survived an attempted ouster from the school's governing board Friday as trustees met to approve using a bond to finance a $500 million settlement with hundreds of women and girls who said they were sexually assaulted by sports doctor Larry Nassar.

At the meeting's outset, trustee Brian Mosallam tried to change the agenda and allow a vote to fire John Engler, who had disparaged accusers and their lawyers in emails. The audience rejoiced, but the board voted 6-2 against taking up the issue, with Mossallam and Dianne Byrum the only trustees voting in favor.

Engler has faced a whirlwind of backlash since the emails surfaced last week. At one point he wrote that Rachael Denhollander, one of Nassar's most outspoken accusers, probably received a "kickback" from her attorney. Within days, the controversy crested in some 150 Nassar accusers demanding his departure before he apologized in a written statement on Thursday.

"I didn't give it the consideration it warranted," he wrote. "That was a big mistake. I was wrong. I apologize."

After Mosallam's Friday motion faltered, Kaylee Lorincz, another Nassar accuser, began the public comment section by urging trustees against hiring Robert Young as the university's general counsel. She said that during mediation for the $500 million settlement, he had responded to a plaintiff attorney's inquiry on whether he would apologize to Nassar's victims with, "Why would I do that?"

"Bob Young will only contribute to the current culture at MSU where victims are blamed and shamed and not taken seriously," she said.

The board voted 5-3 in favor Young's contract later Friday, with trustees Mosallam, Byrum and Dan Kelly in the minority. The deal will dole him a nearly $1.3 million salary over three years.

Lorincz, who alleged in a previous board meeting that Engler was trying to pay her off without her lawyer's input, ended her Friday speech with, "By the way Mr. Engler, I'm still waiting for my apology." Engler has said he remembered the events differently.

She was followed by several others Nassar accusers, all describing the emotional hurt they say Engler has inflicted on them.

"I would like to assure President Engler right off the bat that I am here on my absolute own accord and I'm not receiving kickbacks for this," Morgan McCaul said, to applause. "Do what's right. Fire John Engler."

Engler, a former Michigan governor, was tapped in February to temporarily lead the university after the crisis surrounding Nassar, who was accused by hundreds of women and girls of abusing them under the guise of medical treatment while he was employed at Michigan State. Nassar is now serving a decades-long prison sentence for molesting patients and possessing child pornography.

But Engler's presidency has since become tangled in further public relations scandals of his own doing — and he is not backing down, saying after Friday's meeting that his actions speak for themselves.

"We believe it is impossible for a Nassar to ever exist on this campus with those changes put in place," Engler said. "I've not hearing that disputed by anyone, but it needs to be understood."

Most of his trustees said Friday they want to stop fighting with Nassar's accusers, but they refuse to fire Engler. One trustee loyal to the interim president, Mitch Lyons, promised that if Engler continues to make unflattering comments toward accusers, "I'll be the first to resign."

The board also voted to raise tuition 2.2 to 2.5 percent for most in-state students. The hike will not be used to pay the Nassar settlement. The university will freeze top administrative and leadership salaries and raise faculty salaries by 1.5 percent instead of the typical 2.5 percent.

The budget process was hardly absorbed by audience members, however, with many of them clad in teal for solidarity with sexual assault victims at Michigan State and shouting, "Shame on you."

"After this weekend, if he doesn't get the message, he won't last," Mosallam said about his boss. "He was an apology away from a different outcome."