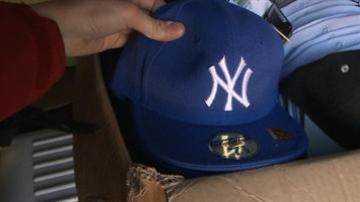 In Michigan, selling counterfeit merchandise is a felony.

"It affects those companies that have their copyright on their product, and they're losing a lot of money," Lt. Chuck Christensen, a detective with the Michigan State Police, said. "When they lose money, they're not paying taxes on that product, so then in turn, the state loses money."

Recently, troopers discovered over $95,000 worth of fake brands like Gucci, Nike and Timberland at a Niles party store.

"Obviously, the premise that they're going in there on is tobacco tax violations, but then when they came across the counterfeit clothing, they segued into that part of the investigation," Lt. Christensen said.

That investigation is still ongoing. But when it comes to uncovering fake goods, big finds like this are few and far between.

"It doesn't come up that often," Lt. Christensen said.

Police have to rely on random inspections and tips from the public.