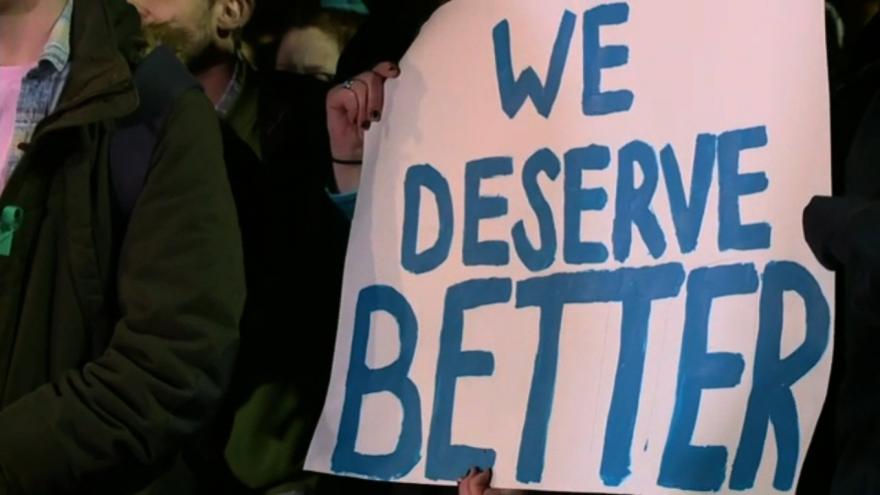 (CNN) -- Students at Michigan State, where former doctor Larry Nassar abused some of his sexual assault victims, rallied before a planned march Friday night in support of the survivors of sex abuse.

Hundreds gathered at a campus landmark known as the Rock where they would hear speakers before marching to the university's administration building.

Former Michigan State gymnast Lindsey Lemke, who gave a victim's impact statement during Nassar's sentencing on seven charges, told the crowd she was inspired by their numbers. She said she wants to see a cultural change at the school to where sexual assault victims feel like they can come forward.

"We should be able to speak up and know that those in charge will do the right thing," she said.

Lemke said outgoing MSU President Lou Anna Simon and other officials cared more about institutional repercussions and legal factors than they did about the students. Lemke vowed to pursue change

"We will not give up until our questions are answered and the correct action has been taken," she said.

One of the signs at the rally said: "They didn't care until we knew." Another read: "Spartans will never let this happen again."

Kiah Manthei, who held a sign that said, "Hear. Believe. Support," told CNN she was there to support women who have gone through what no one should endure.

"It's unacceptable and the administration here needs to take accountability for what has happened," she said.

Student body president Lorenzo Santavicca told the crowd to take it upon themselves to help change the culture.

Kylee Kunse, a freshman who plans to major in animal science, said she came to the rally because she thought that leadership at the East Lansing school needed to change.

Kunse told CNN that she and her friends think that there were university officials that knew about Nassar's sexual abuse and kept it from the public.

She also wanted new officials who "won't let stuff like this continue or happen at all."

The march was planned earlier this week to demand that Simon step down, but after her resignation, organizers said the march should go on as a call for more change from the university and to show love for the victims.

"This Friday we will continue to support the survivors of sexual assault, and for essential change to prevent future neglect of women and girls," they said on Facebook.

People attending the rally also will be encouraged to fill out a postcard with the salutation of "Dear Enabler (blank)" and to send it to a member of the board of trustees.

Earlier Lemke tweeted a picture of herself at the Rock. The boulder had been painted white with the words "Thank you" and "#timesupmsu" written in teal.

The names of more than 160 of Nassar's victims were written on the stone.

"THANK YOU SPARTAN NATION FOR YOUR CONTINUOUS SUPPORT! Never in my wildest dreams did I think I would have this much support from my fellow Spartans or have this big of an impact on so many people. You guys inspire me!!," Lemke wrote, though it was unclear when in the past few days the photo was taken.

The march comes two days after a state judge sentenced Nassar, the former Michigan State sports and USA Gymnastics physician, to up to 175 years in prison for sexually abusing patients under the guise of medical treatment.

Michigan Attorney General Bill Schuette, a Republican who is running for governor, has said he will conduct a review of what happened at Michigan State, and issue a report and recommendations. His office said details will be announced next week. On Saturday he will update the media on the status of his review.

The school is also the subject of several lawsuits and an investigation by the NCAA.