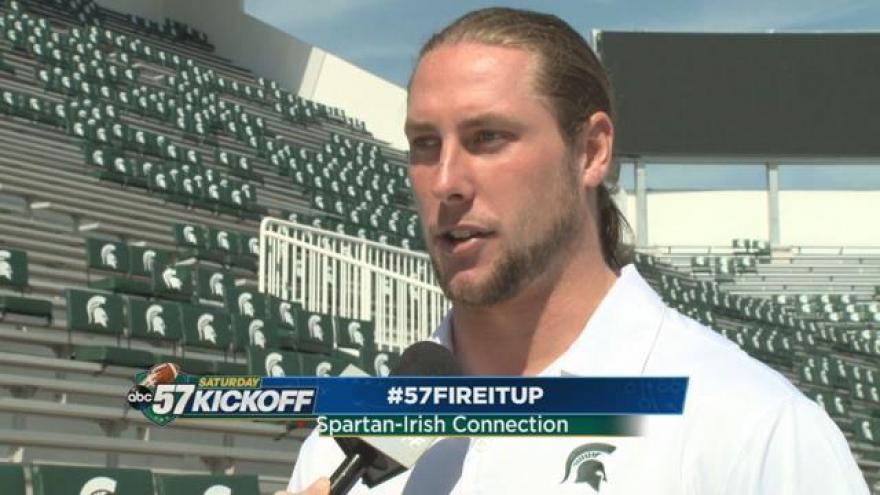 The Michigan State-Notre Dame game has special meaning to Spartans senior linebacker Riley Bullough. Not just because of the impact a win over the Irish could have on MSU's season, but because he has a lifelong love of the Irish.

"Growing up we were Notre Dame fans as well as Michigan State fans. You know one week we would be going down there for a game and the next week we would be up here down there. So you know to be able to go down there and play great football and get a win would mean the world to this team and to me as well," Bullough said.

To say Bullough was born with football in his blood is not a cliche, it is a fact.

Bullough is a linebacker and captain for the Spartans and his love for the green and white started at birth.

His family tree has six members who have played football at MSU.

His grandpa, Hank Bullough, paved the way for the Spartan-Bullough family tradition.

Hank was on the 1952 National Championship team and dad Shane and uncle Chuck followed in his footsteps.

His family roots run to South Bend as well.

On Bullough's mom's side of the family, grandpa Jim Morse was a captain and star running back for the Irish in the 50s and his uncle Jamie played cornerback in the 70's.

"My grandpa played there, my uncle played there, my mom went to school there. So, to have that kind of tradition on both sides is special to me. So to go down there and play in a big game like this, means that much more for me and also my family," Bullough said.

Bullough's uncle Bobby Morse was playing at Michigan State in the 80s and introduced his sister, Leeann, to Shane.

The two fell in love and the rest is history.

As a kid Bullough heard stories about his grandpa Jim and how he led the Irish in receiving as a running back and even had more than 1000 receiving yards for his career. It helped Bullough's love for the Irish to grow.

"My grandpa, he's still around. He loves football, he texts me before every game, so to be able to have someone in my life like that is awesome," Bullough said.

Does he remember visiting Notre Dame when he was young?

"I remember game days there were special. We would always go to the bookstore. We'd always buy footballs and play catch outside before the games. Going there with all the tradition of Notre Dame, it was a special time.  To go down there and play is going to be awesome," Bullough said.

Bullough's grandpa, Jim Morse, has been a huge financial supporter for Notre Dame. His donations helped pay for several projects including the artificial turf in Notre Dame Stadium. There's even a building on campus named after him, the Coleman-Morse Center which is dedicated to academic services for student athletes and the Office of Campus Ministry.