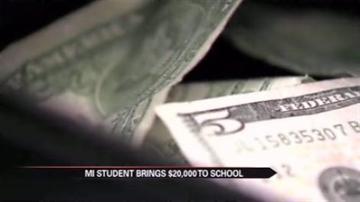 The sixth grader carried the large amount of money in $100 bills in her backpack.

Police were called to the school.

The girl was not keeping the cash a secret which worried school officials.

"Had word gotten out to maybe someone other than some other 12-year-olds, that could put her in a dangerous position," said Chief Mary Sclabassi, Taylor Police Department. "The girl started distributing the cash to some fellow students. As high as $500 to some students."

The Taylor school district released a statement saying it was an unusual situation. They do not have a specific protocol for this type of situation but that the matter is in the hands of police.