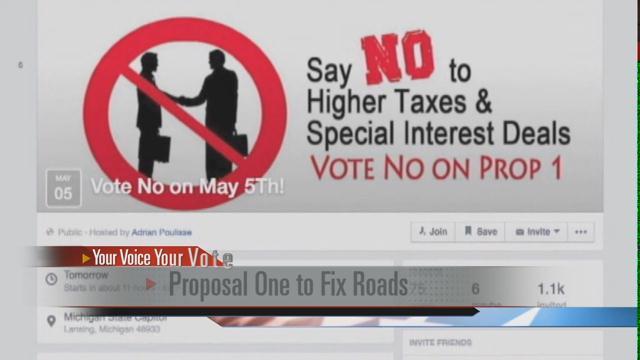 Michigan voters took to the polls on Tuesday to vote for Proposal 1. If the amendment passes, it would increase state sales tax from 6-percent to 7-percent.

Below is what is on the ballot:
A proposal to amend the State Constitution to increase the sales/use tax from 6% to 7% to replace and supplement reduced revenue to the School Aid Fund and local units of government caused by the elimination of the sales/use tax on gasoline and diesel fuel for vehicles operating on public roads, and to give effect to laws that provide additional money for roads and other transportation purposes by increasing the gas tax and vehicle registration fees.

Deann Grega said, “I don't like the tax going up!”

Deann Grega voted no to prop 1 at the Moose Lodge in Benton Township. She said it was a rough morning for people in the area because 4,500 people lost power from a.m. to 10.am. According to AP it was weather related.

The Moose Lodge said the generators kicked in so people could still vote at precinct 3 and precinct 4.

Grega said, “I wish I had a generator, I could have had coffee this morning.”

Kathy Kinnnavy said she also voted no to the state proposal.

Back in February a man pumping gas in Benton Township said he would vote for the tax increase because he kept popping tires in potholes in Eau Claire.

John Glassman said, “I'd rather have the 1-percent added to the sales tax and not let them mess with the gas tax!”

Grega said after reading the wording, she was not happy that the funds raised from tax would go to things other than the roads.

Grega said, “The roads are getting worse all the time!"

Prop 1 states that the money would also benefit the School Aid Fund.

Grega said, “I'm sorry they tagged along other little things onto that!”

Deann and Kinnacy said they would definitely consider voting yes to a tax hike if they knew the money would be used to fix infrastructure.

Kinnavy said, “Now if it was to go to the roads to repair the roads then yes I would go for it.”

Grega said, “I'd be more willing to consider it for sure.”