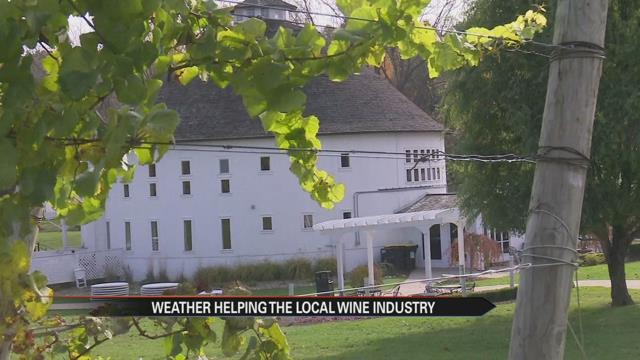 Susan Thibodaux is a self-proclaimed wine junkie.  The Louisiana native, and grandmother of eight, came to the Michiana area to watch the Notre Dame game Saturday.  But Monday afternoon, they made it their priority to stop by the Round Barn Winery in Baroda, Michigan during their trip.

"Wherever there are wineries, we like to go and just experience all of them," she says.

Luckily for the Thibodauxs, Michigan wine is thriving, unlike the rest of the world.

Matt Moersch is a partner at Round Barn, and says they're doing well.

"We're really blessed compared to the rest of the country and regions," he says. "We'll have a 70-80% of a full crop this year."

This is their best season in over three years, and a big jump from just one year ago.

"Last year we had about a 5% crop," Moersch says. "It's like we've been on a vacation with no grapes to work with."

Global wine production is expected to fall more than 5% in 2016, according to the International Organization of Vine and Wine. They've attributed the shortage to the wild weather patterns, like heavy rains, caused by El Nino.

But in Michigan, that isn't a problem

Moersch says that extra snow is actually good for the grapes, because it insulates them.  The problem for crops, is if the temperature reaches below freezing.

Although local wineries are doing well, wine lovers like the Thibodauxs are worried they may have to make some changes to their habits, in the event prices jump because of the shortage.

But for now, they'll just enjoy the moments far from home, over a glass of their favorite wine to bring back with them.

"If we're traveling, it wouldn't be unusual for us to bring home a dozen or eighteen bottles of wine," adds Thibodaux.