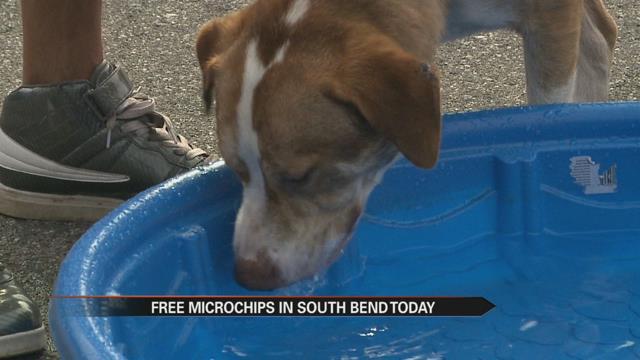 South Bend Animal Care and Control teamed up with Pet Refuge to offer South Bend residents an opportunity to microchip their dogs and cats.

The "Microchip Blitz" began at 10 a.m. on Sunday. The event was made possible because of a grant received from the Bissell Pet Foundation.

They will implant 300 microchips free of charge.

The microchips are placed in the neck area where there is loose skin and can be done in a matter of moments.

“It’s a very simple subcutaneous process, so just right under the first layer of skin. It’s a microchip just the size of a grain of rice, and so it just slips right under the skin like a normal injection,” said Matt Harmon, Shelter Manager at the South Bend Animal Care and Control.

He said they see cases almost daily where pets go missing and are able to be identified because of these devices.

“It’s very, very important for you to microchip your pets. If they’re stolen we can identify them through the microchip, they can be positively identified. It’s a permanent form of identification which is so important these days," he added.

Microchips can be scanned by shelters or veterinarians to be identified and returned to their owners. However, this is a secondary form of identification; pet collars and tags should still be used.

The event is open to South Bend residents only.