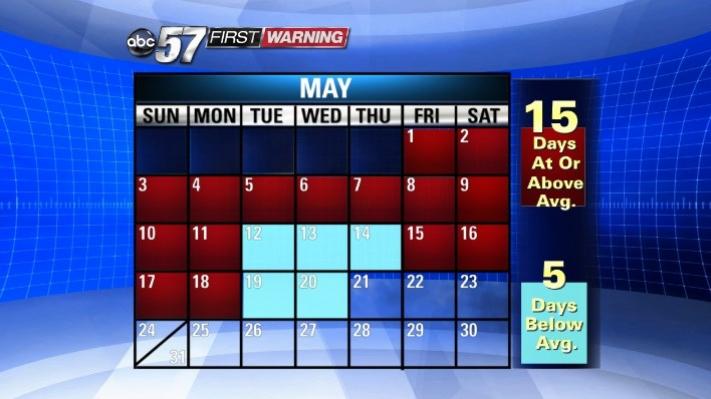 SOUTH BEND, IN-  We still have a little over a week and a half left of May 2015, and we can already categorize this month by it's temperature swings.  The first eleven days of the month were all at or above normal, with four of those days stretching into the 80's (Fig. 1).  That eleven –day steak came to an end on May 12th as high temperatures only rose into the mid 50's, at least 15° below normal (Fig. 2).  This cool streak only lasted two more days before the 80° heat returned on the 15th.

Now, high temperatures have slumped back into the 50's for the 19th and 20th, which had many asking if this was close to record-breaking coldest highs.  Thankfully, we have the perspective that it could have always been colder.  The coldest highs for May 20th were in the mid to upper 40's (Fig. 3).  The forecasted overnight low for tonight is 43°, which means another chilly night, but this is still at least 10° warmer than the record coldest lows near 30° (Fig. 4).

With temperature swings, we rock back and forth between one extreme to another, which means a warm-up is in our future- just in time for Memorial Day Weekend to be exact (great timing, Mother Nature).  Be sure to stop by the ABC 57 First Warning Neighborhood Weather page daily for up-to-date forecasts leading up to the unofficial first weekend of summer.