MIDDLEBURY, Ind.—Community members in Middlebury are hoping to preserve local history with two projects that mix the past with the present.

If you take a walk around Middlebury, from the Bonneyville Mill to as far as Rise’n Roll, you’ll come across about 30 faceless works of art that reflect the lives of those who walked the streets upwards of a hundred years ago.

“I just think there’s so much history in Middlebury that people are not aware of and as people age, we’re losing those stories so I think this will bring the young people out and maybe they’ll ask questions and start talking about history to preserve it,” Board President of Middlebury Then & Now Kim Clarke said. “Middlebury has an ornery past and you wouldn’t expect that in a small conservative community.”

The “Faces of Middlebury” are painted wood cutouts that give visitors can opportunity to take a photo as if they were transported back in time.

Local businesses sponsor each “face” and many of them reflect the business that it sits outside of.

“Firefly Healthcare, they have a nurse, 41 Degrees has a bartender, Nikki’s on Mane has a lady with rollers in her hair,” Clarke said.

Take a look at the map below to see where the “faces” are located. Don’t forget to use the hashtag #FacesofMiddlebury when posting photos with them online. 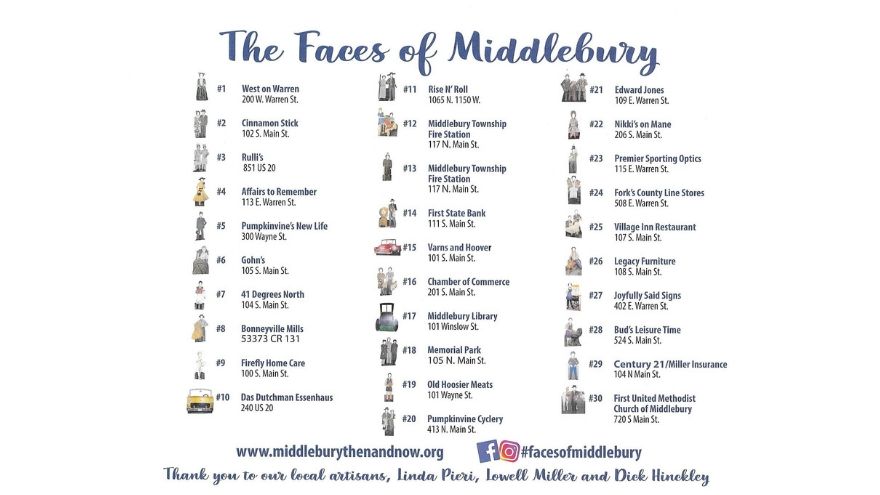 The “faces” will remain out until the end of September and are set to return next year.

Scanning memories as recent as yesterday

Middlebury Then & Now has teamed up with Indianapolis-based nonprofit The Indiana Album to host Middlebury’s first scan-a-thon.

“People from the community bring in their photos and their memorabilia that can be scanned like postcards, family photos, photos of businesses and it can be up to today because yesterday was history,” Clarke said.

The event will take place on September 21 at the Middlebury Historical Museum from 10 a.m. to 3 p.m.

Photos, postcards, documents, etc. can be brought in to be scanned into a searchable, online database that collects memories throughout the state.

“It doesn’t have to be Middlebury, we want all areas around us to participate, too. It’s just a great way to get all of those photos preserved because if there’s a house fire or something, those are gone, so if we can get them online that helps preserve it for future generations,” Clarke said.

Clarke believes events like this one is important for the community as a whole, to both learn about and teach Middlebury’s history.

“We need to know where we came from and it helps form our communities and there’s just so many fun things that have happened in Middlebury in the past that people don’t know,” Clarke said.

From her own research into Middlebury’s past, Clarke learned of a story that has been passed along over the years, one that goes all the way back to the 1930’s.

“It went on for years. It began, I think in the late 30s continued through the 70s,” Clarke said. “Kids would get together and they would go steal an Amish buggy and it would end up on the bank roof on Main Street out here. They would use a pulley system and get it up to the top of the roof.”

Clarke hopes stories like these will be discovered in the pages and folds of old photos and documents ready to be scanned and preserved for future generations to uncover.

Click here to learn more about Middlebury Then & Now.