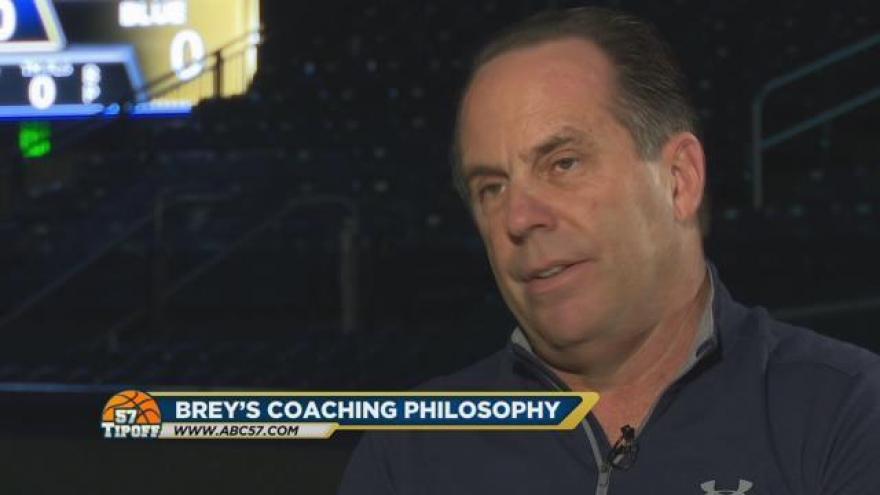 Notre Dame Basketball Head Coach Mike Brey has always wanted to be a teacher and a coach. He has drawn from the positive role models in his life to discover his own coaching philosophy at Notre Dame.

Over the past 17 seasons, Brey has been getting the job done at Notre Dame.

While the trend in college basketball in recent years has been for players to be one-and-done, Brey has taken a different approach.

It seems to be working.

The Irish are coming off back-to-back trips to the Elite Eight and each time, it was with veteran leaders.

"I'm really proud of that, where we've, we're never too young. We have juniors and seniors and we have guys growing up in our program. They've had to pay their dues behind some pretty good players, but then when you ask them, they're kind of ready to do it. That's part of the culture now and I'm really proud," Coach Brey said.

Brey's coaching philosophy started long before he ever stepped foot on a court.

"I was very fortunate, my parents were both teachers, educators and coaches. So, the dinner table talk was what they did with their team, what they did in their classroom. I watched them interact with young people and they were the most unbelievable role models for me to become an educator," Coach Brey said.

Coach Brey took his parents' influence and channeled it onto the basketball court.

After playing at George Washington, Brey went back to Dematha and coached alongside the legend.

"He made me coach the JV, because he said 'You've got to have your own team,'" Coach Brey said.

"We had many great players. So, there was a lot of people coming through to recruit our guys and I was like the young assistant that Coach Wooten let me run some of practice. What a great audition for me. I'm 24 and there's Dean Smith, Lefty Frizzel, Mike Krzyzewski," Coach Brey said.

That audition caught the attention of Krzyzewski at Duke, who just so happened to have an opening on his staff.

"I was fortunate. It just doesn't happen like that. I was really fortunate, but it was because I was a Morgan Wooten guys and a DeMatha guy that I got that," Brey said.

"He let me get my hands on all facets of the program, which made me very prepared to be a head coach. I mean, the 8 years I was at Duke, we went to 6 Final Fours and went to 2 National Championships. That was the Hurley, Laitner, it was unbelievable," Coach Brey said.

In 5 seasons he led the Blue Hens to two conference championships and back-to-back NCAA Tournament appearances.

That put Brey in a position to land his dream job where his toughest task was changing the perception of basketball at Notre Dame.

"There's no question, as I always say, football pays a lot of bills around here and I'm their biggest fan. But you know, when I got here in 2000 we were 30 games under .500. All of a sudden we started earning respect in the Big East. Certainly getting back to the NCAA tournament, we hadn't been to the tournament in 10 years before I got here and we've been on a pretty good run. You've got to get in that thing in March to bring credibility to your program and certainly then your fans, and what I loved, your former players; once we got it going, our former players are really proud to wear ND basketball stuff again," Brey said.

While Brey is approaching 500 career wins, he says what drives him has very little to do with his record.

"That's the pressure, yeah we've got to win, I get that but I want them to have a really good experience. I think I'm in a position to be their best teacher they have here at Notre Dame, because I get them year round for all four years and that's a big responsibility. Getting them confident, sending them out of here as a young man, not the boy who showed up," Brey said.

Coach Brey has certainly done it his way at Notre Dame. He has led the Irish to a 378-and-184 record during his time in South Bend.

Brey said when Jerian Grant calls you two days after the draft and says 'Coach I can't thank you enough,' that's really what it's all about.