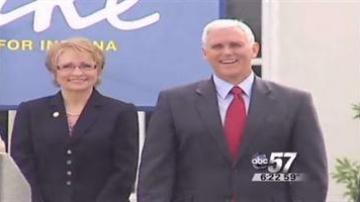 ELKHART, Ind. -- The race for governor is on.

According to Pence, she has the integrity, business background, and state government experience that will make her a great Lieutenant Governor.

After the announcement, the two Republicans kicked off a statewide tour.

They will be at the Elkhart Airport on Tuesday at noon.

Greg is expected to announce his running mate on Tuesday.